SINGAPORE (ICIS)--Export offers for China-origin melamine supplies have spiked on shrinking output and firm costs, with the uptrend not expected to ease as long as supply stays capped, market participants said on Wednesday.

This was a clear departure from the situation in the last few months, when Chinese melamine export prices mostly languished in the low to mid $1,100’s/tonne range, based on ICIS data.

“Offers may climb even higher later”, especially if yuan-denominated prices for feedstock urea stay firm in the near term, a China-based trader said.

Hopes that Chinese urea prices could correct downwards soon have also dimmed on news of recent production woes at some Chinese urea plants, including a 70,000 tonne/year line in Xinjiang.

“I would need to sell melamine even higher to recoup costs and protect margins”, as long as urea stays expensive, a Chinese melamine maker said.

Snug supply is another key upside factor for Chinese melamine prices in the near term.

Market sources said that nearly 100,000 tonnes/year of production capacity in China may have to go offline within the month for regular maintenance work which could span one to two weeks at a go.

This also comes at a time when the Chinese government announced additional restrictions on heavy industrial activities in the vicinity of Qingdao, where a high-profile political summit meeting is due to take place from 9-11 June.

A couple of affected melamine plants located in nearby Shandong province were heard preparing to either cut operating rates or shut completely, in compliance with the government’s requirements.  This will squeeze melamine supplies further.

It was therefore “no wonder” Chinese sellers have turned so bullish in their pricing sentiment, a China-based trader said.

But whether the price uptrend could sustain for long hinges on how demand would shape up, a Chinese melamine maker acknowledged.

Currently, demand is just “stable”, and far from “buoyant”, a Chinese trader noted.  In China, offtake has slowed down as some downstream factories were forced to scale back their operations to comply with the recent Qingdao restrictions, and this has invariably weighed down their requirements for raw materials such as melamine.

Outside of China, buyers in southeast Asia, which typically absorbs a lion share of Chinese melamine exports, are heard still at ease and not rushing to book fresh cargoes, as they said they have sufficient stocks from earlier purchases. “I could wait until prices come off later to buy”, an end-user in the region said.

Melamine is used heavily in southeast Asia for plywood laminate production. But as a recent shortage in logs has slowed the plywood industry down, market sources said that this would also impact on the industry's intake of melamine.

In India, demand for melamine imports have also dropped, alongside a recent depreciation of its currency against the US dollar. And even if it has to buy, India buyers would "avoid" China-origin supplies now, an Indian trader said.

China melamine imports into India are subject to an additional $331/tonne anti-dumping duty, which means that at current level of FOB China offers, Chinese imports are no longer attractive and competitive vis-a-vis offers from other suppliers in Japan and Middle East. 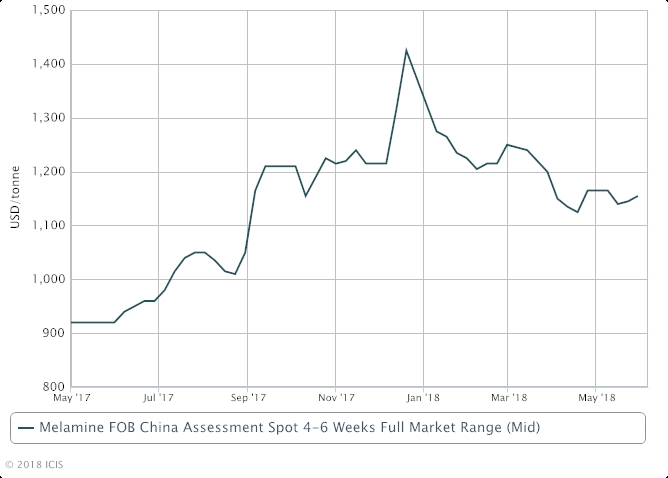